Baking with yeast is addictive. I prepared by reading as much as I could on the subject before gathering the courage to bake my very first bread. Happy to report it was a success! I may have tried but a simple focaccia but it was an exhilarating experience. Nothing like instant success to nudge you toward baking in unknown territory! And look at me now: sharing a step-by-step process of baking this sweet Cinnamon Wreath! At a glance the recipe is simple, but as we go along there will be a few things that need you need to focus on. A mystery for me was the addition of milk in place of water, and using butter and egg yolk. But ingredients at hand, I went ahead and embarked on my little kitchen adventure.

I’ve made my own notes in this recipe, detailing it as much as I can and I hope they help you when you give this wonderful bread a try.

Step 1: Get ingredients together, make sure everything including the yeast is at room temperature. The recipe defines the milk at luke warm but if you’re a beginner like me, then I recommend you use a thermometer and ensure it doesn’t cross the 110F mark. Add yeast and sugar to the milk and wait for it to work its magic. It doesn’t take more than 5 minutes. Step 2: In a large bowl add the yolk, butter – it should be melted, don’t mistake that for room temperature, ensure its pourable consistency – flour, salt and knead it till it forms a ball. In case you feel it’s not coming together or the liquid content is too much, feel free to add in some more flour working it in tablespoon by tablespoon.

Step 3: Go read a book, make the filling and wait for the dough to rise and become double in size.

Ah… now this is where I deviated from the recipe, it calls for the entire dough to be rolled out and that would generate one huge wreath and I wasn’t very comfortable with this, so I divided the dough into 2 making smaller wreathes, making the rolling and shaping easier to handle. Back to the recipe now…

Step 4: Dust the work surface, divide the dough into 2 equal parts and roll the dough out till you achieve a 1 cm thickness. Tip: Use your scale to be precise while dividing the dough. Step 5: Spread the filling and gently roll up the dough into a log. Leave a tablespoon to brush on top of the bread too.

Step 6: Using a sharp knife cut the log into half, length-wise.

Step 7: Twist the two halves together, keeping the open layers exposed as seen in the photo tutorial. Roll it up into a round shape and then transfer on a baking tray.

Step 8: Brush the remaining filling on top and bake for 30 to 35 minutes in a preheated oven. Reduce the temperature to 350F after 5 to 10 minutes so it doesn’t over brown.

Let it cool. You could give it a cream cheese glaze, dust it with icing sugar or warm it up and dip it in a little butter like I did. 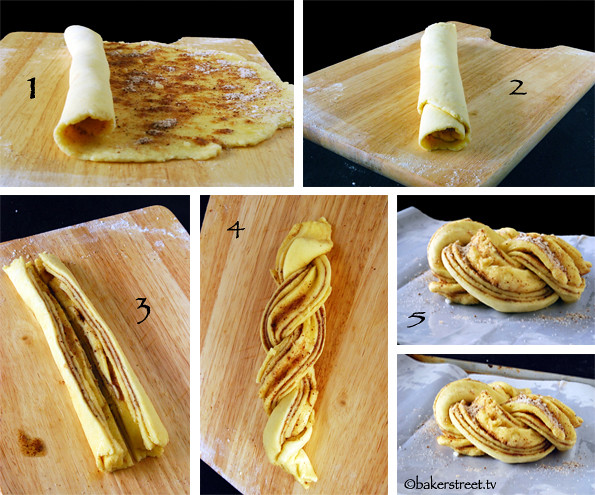 There you go. A magnificent bread – buttery, cinnamon-y, a bite of which will make you feel everything in the world is right again. Did you notice a small piece of my bread broke? It was still warm and I wanted to get done with the pictures so while transferring, a little piece fell off and instead of adding it back, I just ate it.